Without a doubt, the one thing I have always known that I wanted to be was a mom. In my earliest memories of playing as a child, I am holding a baby doll in one arm while hanging doll clothes on my small clothesline with the other. At night before sleep, I’d tuck those dolls into their own beds and kiss them goodnight. I wanted to be the best mom I could be and I was practicing for my far-off future.
When I was too old for dolls, I still knew I wanted to be a mother, although not until my career was well established. I figured that time would come late in life, like when I was thirty or something. And then the adult years of true baby lust came and I was saddened each month when my period came, even though I was using birth control and we agreed we weren’t ready. Parenthood was still off in the future.
The planning began in earnest after one particularly emotional day at work. I had kept vigil with a family the entire day. The parents and two young children had been in a car accident on the way to school that morning. The dad was critically injured and it was clear that he probably was not going to survive. The mom was being treated in another room so I was called in to start some psychological first aid with the kids. Later in the day, as the kids prepared to say “good-bye” to their father, the mother kept saying over and over, “At least I have the two of you. At least I have the two of you.” And that was the moment for me when I decided not to put off parenthood any longer.
Eleven months later and nine years ago today, I met the man who made my dreams come true. 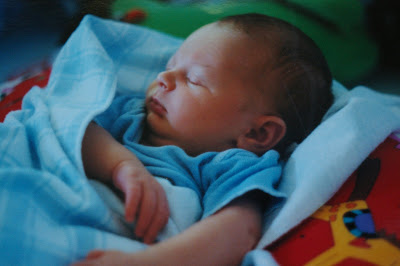 Happy Birthday Dean. Thanks for making me a mom. 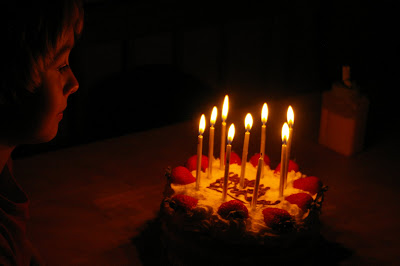 that is so beautiful. please tell me your secret to finding a wonderful man that brings you coffee in bed every morning AND does that amazing romantic thing with the sidewalk chalk. and this entry reminds me of one of my favorite books about motherhood: Are We Having Fun Yet? the 16 secrets of happy parenting by Kay Willis, who raised 10 children and lived to tell the tale AND found her own company on it.

What a beautiful, awesome tribute! Happy birthday to Dean. Happy motherhood to you!

What a beautiful post! Happy birthday to your first "baby". Oh, and Happy Motherhood Anniversary to you.

Congrats! And very beautiful baby--he does look like a dream come true!