It was time. The heat rash on the back of his neck told me so. The fact that he kept pulling it off his face and neck into a ponytail was a sign as well. So this weekend, with the help of my visiting sister, we took Logan for the Big Boy Haircut. Armed with the camera and a handful of lollipops, we went to the same salon that all my friends take their kids thinking it would be the place that would be most experienced and least annoyed with toddlers. He was fine for the first half and lost patience with the sitting and the combing right about the same time I decided that he needed more cut off. 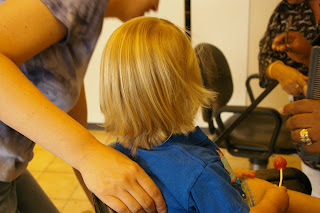 Unless he was the new spokes-baby for Dutch Boy Paints, I couldn't leave his hair like that. The stylist worked painfully slowly and was quite crabby with me. She kept asking me how I wanted it cut and finally I snapped and told her to just CUT IT already. It's not like she was going to give me exactly what I asked for anyway and I don't really see myself trying to get his hair cut again anytime soon. It was hard enough for me to accept getting it cut in the first place and then to hold my screaming toddler while trying to give instruction, I just couldn't take all the stress. It didn't help that Logan was looking in the mirror and pulling at his now short hair crying "Put it back on!" He calmed down at the very end when she realized his issue was the comb and she switched to a brush. He slept off the trauma in the car and proudly showed everyone the new do when we got home. I, however, needed more recovery time. 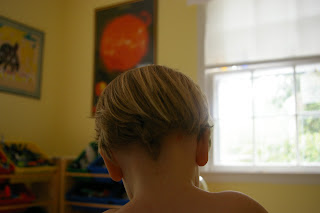 I'd like to say that I would have felt better if I had taken him to more toddler-friendly place, or if I had gotten a sample of his cut hair before it had hit the floor and had gotten mixed up with all the other hair but the truth is - it was really hard to let go of that hair. Luckily, his Big Boy Haircut actually makes him look more like a baby to me than all that long baby hair. At least, that's what I keep telling myself.
Posted by Susie at 10:00 AM

That had to have hurt you, Mama. He has some seriously beautiful baby hair!

But the end result looks adorable from the back :)

for a different kind of girl said...

That first haircut is so hard. I put it off for a very, very long time with my oldest, and then cried through the entire process!

In the end, it looks like he got a good cut, though!

That is a tough thing--esp. when it's such sweet hair.

It DOES look really cute!

You are all the best! Thanks!

you are so courageous! that is some seriously beautiful baby hair to part with. But I do love the final pic, too, you were right to have her take more off and it really shaped up well.
I remember Zac's first haircut! LOOOONG ago. He is...eleven (sobs).

Awww...those cuts are so traumatic...moreso for the mommy! It looks very cute, though!